Will a new program monitoring air quality at Denver schools make a difference for students? 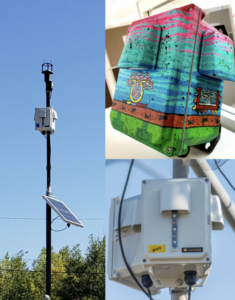 Will a new program monitoring air quality at Denver schools make a difference for students?

For the first time, parents, teachers, and administrators at 10 Denver public schools will know just how much air pollution students are exposed to on campus any given day.

City leaders are deploying highly localized air quality sensors with the goals of empowering schools to make healthier choices for their students and reducing asthma rates. The data from the first 10 schools will come online next month, and the grant-funded sensors should be rolled out at an additional 30 city schools by 2021.

In the short term, schools could opt to keep students inside on a poorer air quality days, shift recess hours, or encourage parents not to keep their cars running while waiting in the carpool lane. Longer-term possibilities could involve moving the location of a playground farther from a busy street, or working with the city government to alter construction times, or to change truck and bus routes. But in the short-term, at least, Denver Public Schools has no plans to require schools to take action on high-pollution days. That will be up to individual principals, which is raising questions about whether the sensors, and their data, will have the intended effects, including reducing health-related absenteeism.

“The district has to enforce that, in every school, to keep kids safe, because if they don’t, if they leave it to each individual school, they’re going to do whatever they want to do,” said Sandra Ruiz-Parrilla, a parent living near Interstate 70 in the Elyria neighborhood. “I think that’s really unfair for our kids.”

The grant proposal, meanwhile, explicitly lays out a goal of developing programs at all 10 pilot schools that would help reduce students’ exposure to harmful air. City and health officials have been actively assisting schools with creating these programs, expected to be in place by December, according to the grant. The City of Denver also has a long-term goal to implement 10 new city policies aimed at improving school air quality by 2021.

“It’s empowering the school communities to get data that they can actually do something with,” explained Christy Haas-Howard, the district’s school nurse. “So each school can make a decision based on what the air quality is at that time and at that specific place.”

The three-year program was made possible by a $1 million Bloomberg Mayors Challenge grant awarded to the city, but the grant application shows the total price tag for the project will exceed $2.5 million once sensors are in place at all 40 schools. City and state health departments, as well as additional philanthropies are projected to cover the extra $1.5 million in costs.

Documents associated with the grant acknowledge students in Denver’s lower-income communities are more burdened by air pollution than those in higher-income areas.

The 10 schools set to have the sensors up and running by the start of the school year are Swansea Elementary, Garden Place Elementary, Fairview Elementary, Sabin World Elementary, Gust Elementary, University Prep – Steele Street, South High School, Bruce Randolph School, High Tech Early College, and Prep Academy. City officials say those schools were chosen based on student asthma rates, the number of students eligible for subsidized lunches, a proxy for poverty, and principal willingness to participate. Check out our interactive map lower on this page to see where those schools are located.