Sensitive to air quality? Watch what you do today 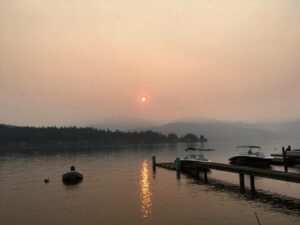 Sensitive to air quality? Watch what you do today

The Washington state Department of Ecology issued an sensitive to air quality alert Wednesday for Whatcom, Skagit and Snohomish counties as smoke from British Columbia wildfires moved south this week, creating a haze over what should be blue skies in the region.

Washington’s Air Monitoring Network labeled parts of Whatcom County, such as Lynden and Maple Falls, on Wednesday as “unhealthy for sensitive groups.” Young children and people who already have breathing difficulties should limit their activity outdoors and seek medical help if they have any problems, the Northwest Clean Air Agency said.

In Bellingham, air quality was rated moderate, and Ecology monitoring stations in Ferndale and Custer report air quality as good.

BC Wildfire Service spokesman Kevin Skrepnek warned that winds from the interior could bring in more wildfire smoke over Canada’s Lower Mainland Wednesday, according to the Abbortsford News.

Read more: Sensitive to air quality? Watch what you do today

Is 'Big Brother' Watching Me or My Back?