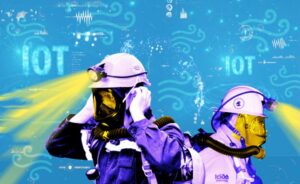 Underground mines are large industrial operations and prime for IoT adoption, especially where safety is concerned. Mines are often in remote geographic locations. While an open-pit mine, even a large one, can be inspected by drones and other straightforward methods, underground mines are dark, complex, and constrained, with layouts that change as ore bodies are exhausted and new ones are exploited. The environment is often hot, dusty, and full of vibration, lowering the effective life of monitoring and communications equipment.

As a result, mining is dangerous. Machinery is large, visibility often poor, and maneuvering tight. And workers face danger from pooling toxic gasses and airborne particulates, which can both kill quickly and cause long-term lung damage.

Providing a safe working environment for miners is a key business priority for the industry and one where IoT implementations are proving their usefulness. Still, the penetration of IoT in mining is limited.

Is Mining Inherently a Technologically Conservative Business?
Mining is hugely capital intensive, risky, and hazardous. It requires operations in remote, difficult locations. And it is at the mercy of fluctuating commodity prices (iron ore has swung between $40 and $120 a metric ton just in the last three years), making long-term investment difficult.

Under these conditions, it can be difficult to justify investments in new technologies. Andrew Shook, in AusIMM Bulletin, has discussed various reasons why innovation is difficult in this industry, including how commissioning problems in new technologies can do serious damage to the economics of a mining project. Both highly profitable and unprofitable mines have trouble justifying new investment, and it is still difficult to know what lies in the rock being dug into.