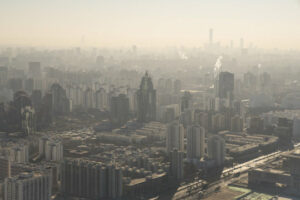 Levels of two major air pollutants have been drastically reduced since lockdowns began in response to the COVID-19 pandemic, but a secondary pollutant — ground-level ozone — has increased in China, according to new research.

Two new studies in AGU’s journal Geophysical Research Letters find nitrogen dioxide pollution over northern China, Western Europe and the U.S. decreased by as much as 60 percent in early 2020 as compared to the same time last year. Nitrogen dioxide is a highly reactive gas produced during combustion that has many harmful effects on the lungs. The gas typically enters the atmosphere through emissions from vehicles, power plants and industrial activities.

In addition to nitrogen dioxide, one of the new studies finds particulate matter pollution (particles smaller than 2.5 microns) has decreased by 35 percent in northern China. Particulate matter is composed of solid particles and liquid droplets that are small enough to penetrate deep into the lungs and cause damage.

The two new papers are part of an ongoing special collection of research in AGU journals related to the current pandemic.

Such a significant drop in emissions is unprecedented since air quality monitoring from satellites began in the 1990s, said Jenny Stavrakou, an atmospheric scientist at the Royal Belgian Institute for Space Aeronomy in Brussels and co-author of one of the papers. The only other comparable events are short-term reductions in China’s emissions due to strict regulations during events like the 2008 Beijing Olympics.

The improvements in air quality will likely be temporary, but the findings give scientists a glimpse into what air quality could be like in the future as emissions regulations become more stringent, according to the researchers.

How to clean a gas detector